From 6-8 May 2022, after a long break, the ShishaMesse in Frankfurt opens its doors again for hookah fans from all over the world. Eight years after the launch of hookahSqueeze at the same venue, the first flavours in the brand new tubes and the redesign will now be presented there. Among the 20 flavours are two brand new ones that are now super easy to "squeeze" from the tube into your head.

hookahSqueeze was the world's first hookah vapour paste in 2014 and has revolutionised the world of tobacco-free hookah products after the completely overwhelming release at the ShishaMesse in the same year, the second ShishaMesse ever.
The principle of a paste that can be smoked in the hookah was developed from 2012 in the then Shisha Lounge by the current hookahLove managing director Maximilian Held in Landsberg am Lech (Bavaria, Germany) in close cooperation with his employees, friends & guests. At that time, there were no known tobacco substitutes for shisha without a plant base, apart from steam stones. With hookahSqueeze, this base is an extremely fine, natural mineral mixture with very high absorption capacity, which is highly heat-resistant and therefore does not burn.

hookahSqueeze should actually have always come out of the tube

During the development phase from 2012 onwards, the invention was given the name hookahSqueeze - and the "squeeze" part was due to a wishful thinking from the very beginning. Namely, that the paste could be squeezed easily from a tube into the head.
Nevertheless, we decided on a firmer consistency at that time and launched hookahSqueeze in tins.
The background was that the paste was initially intended to be smoked pure, i.e. purely as a tobacco substitute, and that it was allowed to be used in our shisha lounge despite the smoking ban in Bavaria. That is why we originally developed it. In contrast to the currently widespread funnels, multi-hole heads were used almost exclusively at that time. A thinner paste from the tube would have run through the holes very easily.
And we all only realised the incredible potential in mixing with tobacco over time.

Today, Squeezy is an indispensable add-on for every hookah that should smoke and taste both longer and better than one without hookahSqueeze - whether mixed with tobacco or pure, completely without nicotine.
Funnels have become - quite rightly - the most used heads. So the time for real SQUEEZE from pretty tubes has undoubtedly come.
We are very grateful and happy that we can now also professionally fill hookahSqueeze into high-quality tubes here in Bavaria. Our new tubes are mostly made of recycled plastic (technically the highest possible proportion) and of course 100% made in Germany.

hookahSqueeze from the tube is more practical, effective & efficient!

Not only is it more practical with the tubes, but also more intense and efficient! All 20 flavours have been reworked and adjusted in their flavour profile and, if necessary, strengthened. hookahSqueeze is now enough for even more heads - of course, always depending on how intense you like it and with which setup you smoke.
Due to the improved consistency and lower viscosity, hookahSqueeze now combines even better with hookah tobacco when mixed. Whether mixed over, under or with the tobacco, squeeze it your way!
When smoking straight, however, we now recommend a funnel more than ever. Mixed with tobacco, however, hookahSqueeze can be smoked easily in any head - as it always has been.
Due to the composition of only four ingredients without additional binders, hookahSqueeze still needs to be mixed properly before use. To do this, you can now "Squeeze & Shake" the tube, i.e. simply squeeze and shake, thereby mixing the contents again, especially after standing for a longer period of time.

At the ShishaMesse 2022 in Frankfurt, the new tubes can be purchased exclusively in limited quantities together with the two new varieties Kiwi and Pineapple. But then fans of the paste will have to wait at least another month. Retailers can already pre-order the new 25g tubes, but delivery will not begin until June. The exact sales date will be announced after the Shisha Fair.

hookahSqueeze is and remains a product from the shisha scene for the shisha scene. The two new flavours are not only a wish of the community, but also the finest flavours that we have found in the now more than 20 years of our shisha experience in these flavours.

Like a ripe kiwi on a hot summer's day, only in your hookah! hookahSqueeze Kiwi has a clear, intensely fruity taste - accompanied by a dominant sweetness and rounded off by a strong sour note.

A really fruity and refreshing flavour, whose flavourful power can be fully exploited especially in mixtures with intensive tobacco (e.g. Darkblend).

Pineapple is the tropical-fruity and pleasantly intense pineapple from hookahSqueeze. Whether pure or mixed, with its fine sweetness and fresh pineapple aroma, it is not too intrusive and provides a tropical taste experience in every hookah.

Short side info about hookahSqueeze and our company

hookahSqueeze is not a contract production, every gram of it comes from us directly from Landsberg am Lech and is made with a lot of genuine love for hookah. We test our products on ourselves every day. We are not driven by endless profit maximisation, but happy and satisfied with sufficient cost recovery and enough room for further development. Surpluses are invested, for example, in improving work processes, development and product safety. The path is the goal, with satisfied customers, employees, trade partners, service providers, suppliers, authorities and a sustainable, reflective way of working and corporate culture.
As required by law, all our products are not labelled in accordance with the Tobacco Products Act/Tobacco Products Ordinance, but are subject to labelling in accordance with the Product Safety Act and the CLP Regulation (due to the flavourings required for this, some varieties are a chemical product subject to labelling).
hookahSqueeze is a product assimilated to water pipe tobacco in Germany and is therefore subject to tobacco tax (excise duty) on water pipe tobacco, even though it does not contain tobacco or nicotine (customs tariff number/HS code: 24041910). 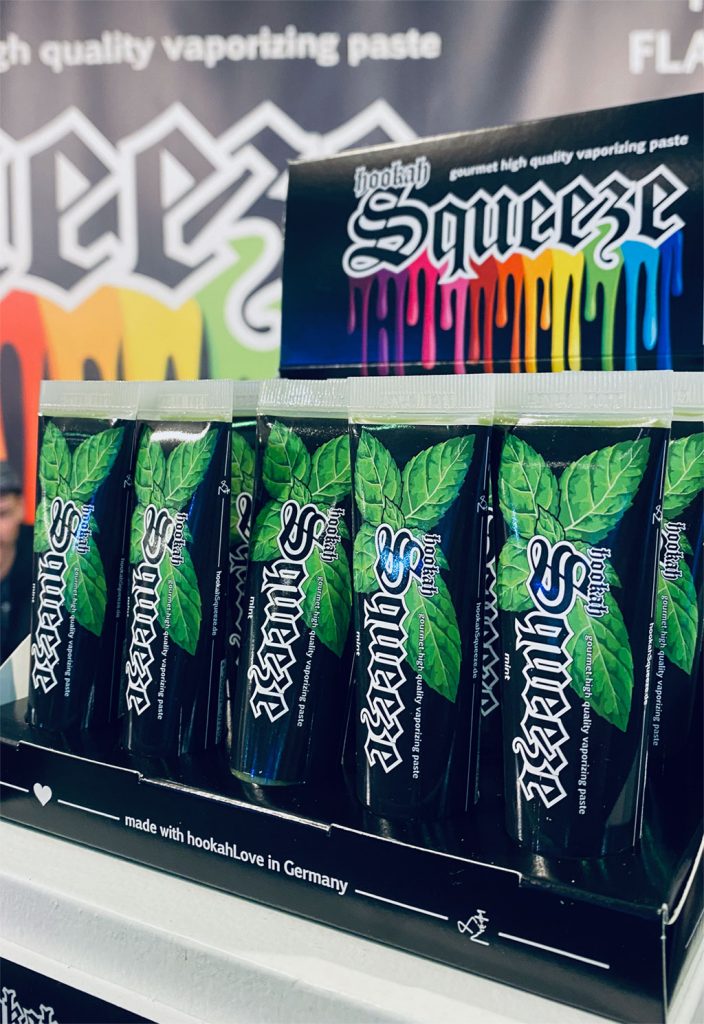 20 hookahSqueeze Flavours are now available in wonderful tubes. The even creamier Squeezy now combines much better with hookah tobacco when mixed and provides super intense flavour!

To use this website, you must be at least 18 years old.

Are you 18 years old or older?